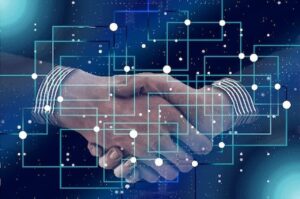 Just like the Internet at the end of the last century, NFT domain names have seemed to gain popularity among the general public as many people are considering investing in various blockchains. As a new tech tool, the fees that accompany the registration of a domain name on certain platforms can pose a major obstacle for any project to register a Web3.0 domain name. A sudden drop in Ethereum ‘Gas’ fees on the first weekend of July illustrated the public’s enthusiasm for Web 3.0.

What is the place of domain names in Web 3.0?

Transactions on blockchains are now seen as a potential solution to the middlemen of common real-world transactions, who take a commission for every money transfer. NFT marketplaces such as Opensea have recently become more popular for places to trade and sell NFT domain names.

A long-standing problem with the Ethereum ecosystem, and its main obstacle to attracting the general public, is often attributed to extremely high transaction fees. Notably, in January 2021, Ethereum’s Gas fees jumped due to the enthusiasm around NFTs and decentralised finance. For example, between January 2021 and May 2022, the average Gas cost required by Ethereum was around $40 per transaction, with a peak of $196 recorded on May 1st, 2022. As a result, many users had chosen to abandon Ethereum in favour of blockchains with significantly lower fees such as Solana or Avalanche.

What about the latest notable events on the Ethereum blockchain?

In the first week of July, an unexpected phenomenon was observed on the Ethereum platform: the dashboard of the Ethereum Name Service, the decentralised autonomous organisation that runs the service, showed an increase of almost 200% in .eth domain name registrations between the 2nd and 3rd of July. The following week, the ENS platform recorded more than 100,000 registrations. This astonishing increase illustrates the growing interest of the general public in Web 3.0 registrations. The ENS platform had already been gaining popularity since April, when holders of certain categories of domain names started to form clubs.  One example is the formation of the 10K club for owners of ENS domains consisting of numbers between 0 and 9999. As a result, in May, a record was reached with 365,652 new Ethereum domain name registrations, and the 122,000 new registrations in June brought in some $6.6 million.

Alongside this surge in domain name registrations, the second largest sale on the ENS platform was recorded on July 3rd, for the domain name “000.eth” which sold for ETH 300 (around $320,000 at the time of sale). These events had a strong impact as they rocketed Ethereum to the top of the seven-day NFT sales chart on news tracking site Dapp Radar. In addition, social media interactions related to ENS also spiked. According to the crypto-currency social tracking platform, Lunar Crush, engagements with the keyword increased by 108.4% in seven days.

So, what is the explanation for the surge in domain name registrations on the platform?

Just like on Web2.0, owners of “.eth” domain names have to pay a fee on a regular basis, and in addition to this fee, they also pay a Gas fee. So, naturally, when the latter fall, the number of new registrations increases. Experts have claimed that the explosion in demand for ENS domain names is mainly due to the drastic drop in Gas fees seen over the weekend of July 2nd and 3rd, whose value wavered between from $1.67 to $1.97,the lowest levels in over a year.

The question then arises as to the explanation behind this sudden drop in transaction fees on the Ethereum network. The answer is mainly related to the equally large drop in daily transactions. In fact, according to Cointelegraph, daily NFT sales also reached their lowest level in over a year on Saturday. Globally, the NFT ecosystem recorded its worst performance during the month of June 2022, with an overall number of daily sales around 20,000 for an estimated value of $13.8 million.

Any events to watch for regarding the Ethereum blockchain?

The Merge is the name given to a highly anticipated event on the Ethereum blockchain. In fact, on September 19th, the Proof of Work (PoW) model will be replaced by the Proof of Stake, (PoS) which will then become the only way to verify transactions on the Ethereum protocol. The Merge will be one of the most important steps in the history of blockchain technology, because once it is operational, this new process will reduce the energy consumption of node validation operations by 99%, going against one of the main criticisms it has received for being environmentally unfriendly.

In fact, these two main consensus protocols dominate blockchains and ensure synchronisation between all nodes in the network. With Proof-of-Work, miners have to solve a complex mathematical problem requiring significant computing power in order to confirm a transaction. In contrast, Proof-of-Stake is a much less expensive consensus, requiring no energy expenditure and no special hardware. Validating a block simply involves nodes pledging a large amount of cryptocurrency. The larger the amount, the more likely a node will be chosen to update a blockchain’s registry.

Ultimately, this change in the process of validating transactions on the platform could have a significant positive effect on Gas fees. If Gas fees continue to fall, it is likely that the general public will be more inclined to develop a Web 3.0 business and register domain names on blockchains, particularly to extend the protection of various brands.

To find out more about branding processes in Web3 and the issues surrounding this mechanism click here !