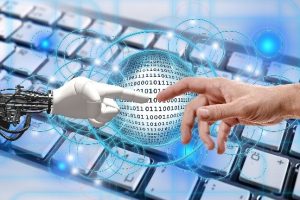 Legal issues relating to the ownership of inventions and works created using artificial intelligence (or “AI”) are at the forefront for a variety of businesses.

The first step is to define what artificial intelligence is.

Artificial intelligence is the implementation of a number of techniques aimed at enabling machines to imitate a form of real intelligence. Artificial intelligence is present in a large number of fields of application. It is now used in some cases to create works through algorithmic processing. Such is, for example, the case of the robot painter named E-David, developed by a German university, whose calculation algorithms allow it to paint canvases that are very similar to those painted by humans.

Intellectual property law was primarily designed to protect the fruits of human intellectual labor, therefore it has had difficulty adapting to the new tools that have emerged as a result of digital evolution.

AI has further blurred the distinction between creator, tools and creation. For some, it is only a tool, for others it has a fundamentally innovative character to which the law should adapt.

In France, the Intellectual Property Code imposes a condition of originality for the works to be protected by copyright. In addition, the works must reflect the expression of the author’s personality. These criteria imply that a work can only be created by a human, possibly assisted by a machine which then serves as a tool in the creation of the work.

Thus, if the work is only created by an AI, the qualification of work cannot be used and copyright protection is not applicable. The same will be true for an invention generated by a machine that cannot be patented.

European law requires the copyright to reflect the “author’s own intellectual creation”. However, in European countries there is no universal approach to the requirement of a human author. The United Kingdom, for example, provides protection for computer-generated works and the author is the person who arranges for the creation of the work, so the authorship is attributed to the programmer.

Thus the inventor cannot be a company or a machine. There is therefore a discrepancy between the obligation to identify the real inventor and the person supposed to be the inventor. It is thus affirmed that decisions regarding the dissemination of the invention will be made by “the owner of the AI machine”.

American copyright law is still strict regarding works made with AI. For example, it has been stated that “the Office will not register works produced by a machine or simple mechanical process that operates randomly or automatically without any creative contribution or intervention by a human author” (Compendium of US Copyright Office Practices of 2014).

Additionally, in a decision of April 22, 2020 concerning an application mentioning an AI tool, DABUS, as the sole inventor, the USPTO recalled that the inventor must be a human.

Are we heading towards an evolution of law, more in line with technological developments?

The question is whether it would be appropriate to modify the intellectual property system in the light of technological developments or to create a sui generis right of AI.

A WIPO meeting on law reform in this area, which will provide an opportunity to discuss the above-mentioned issues will take place in July 2020,

In addition, the European Commission published a White Paper on February 19, 2020 after presenting the ethical guidelines for trustworthy AI on 8 April, 2019. It defined AI, as well asits global guidelines in the regulation of artificial intelligence.

It had already adopted the “Civil Law Rules on Robotics – European Parliament Resolution of 16 February 2017”.

The latter stressed that “considering that, now that humanity is at the dawn of an era in which increasingly sophisticated robots, intelligent algorithms, androids and other forms of artificial intelligence appear to be on the verge of triggering a new industrial revolution which is likely to affect all strata of society, it is of fundamental importance for legislators to examine the legal and ethical consequences and effects of such a revolution, without stifling innovation”.

In addition, a legal personality for machines (electronic personality) could be recognized which would amend the copyright.

Let us recall that currently the only solution, in innovative fields, is to refer to industrial secrecy to preserve the innovations made by AI.

Thus, a reform or clarification of the law to respond to new issues in a more secure manner would be welcome.