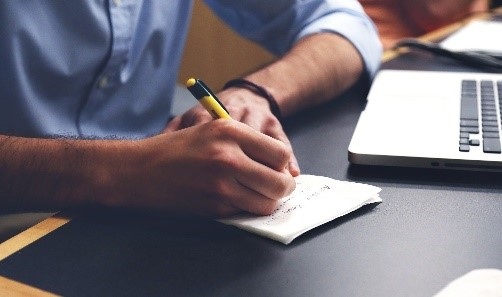 In a decision handed down on 23 February 2021, the Paris Court of Appeal offers some guidelines in copyright infringement, recalls some key principles and provides an overview of all the usable means of defense.

Let’s dive into the facts: in 1988, Jeff Koons started his “Banality” series of works, which consisted of creating three-dimensional objects inspired by various images. One of the works in this series, “Fait d’hiver”, shows a young woman in a fishnet corset, lying in the snow, with a small pig wearing a barrel around its neck.

In November 2014, the Centre Pompidou in Paris hosted a retrospective of Koons’ work, in which several works from the “Banality” series were exhibited, two of which have been subject to infringement lawsuits.

One of the two disputed works is “Fait d’hiver”. The designer of a 1989 advertising campaign for the company Naf-Naf, Frank Davidovici, sued the Centre Pompidou and Jeff Koons, among others, for copyright infringement of the campaign. At that time, the Naf-Naf brand’s Autumn/Winter collection was presented to the general public thanks to a photo of a young woman lying on the snow and accompanied by a pig, wearing a collar reminding one of a Saint Bernard dog.

On November 8, 2018, the Paris Court of First Instance found all the defendants guilty of infringing Frank Davidovici’s economic and moral rights. In their appeal, the defendants then set out all the possible defences in the context of such infringement action.

Was the “fair use” exemption a good idea?

Insofar as Jeff Koons’s work “Fait d’hiver” was conceived in the United States, the artist upheld that United-States law should have applied. To strengthen his argument, he relied on the Rome II Regulation, which seeks to preserve the principle of “lex loc protectionis” about “a non-contractual obligation arising from an infringement of an intellectual property right”. It would have been a mistake for Jeff Koons not to try to benefit from this Regulation, notably since American law provides for the “fair use” exception, which allows the exclusive rights of an author to be limited, in particular, to allow his work to be parodied (17 U.S.C. §107). But let’s remember that in 1992, Koons lost an action in which he had claimed this exception. At the time, the Court charged him with copyright infringement for his sculpture “String of Puppies”, which was considered a copy, with a few differences, of a photo taken by the American photographer Art Rogers. The judges deemed that the slight differences between the original photograph and the sculpture were insufficient to rule out infringement.

That said, and thus contradicting one of Jeff Koons’s arguments showing the differences between his “Fait d’hiver” and that of Naf-Naf, the Court of Appeal recalls that infringement is not assessed regarding the differences, but rather in terms of the similarities between the works involved.

Not too much of a surprise, the Paris Court of Appeal found that French law applied to “Fait d’hiver” insofar as the copyright infringement took place in France. Hence, the exception of fair use was not applicable in the present case.

Did Frank Davidovici have legal standing?

Koons then claimed that Frank Davidovici lacked legal standing. Indeed, the original photograph was a collective work and therefore the property of Naf-Naf. The evidence provided by the appellants was not enough for the Court of Appeal, which came to the same conclusions as at first instance, namely that the advertising campaign was not a collective work but a collaborative work, in which Frank Davidovici’s contribution could be “individualized”, and that the other authors had assigned their economic rights to him.

On the French five-year limitation period for infringement

The appellants argued that the work had been created more than 20 years before the subpoena (which took place on January 9, 2015), that it had been exhibited since 1995 in a Parisian gallery. In addition, they claimed that Jeff Koons displayed the reproduction on his website where he described it as ‘unmissable to anyone interested in [his] work’ and by “anyone”. Koons targeted the respondent.

The Court of Appeal rejected this argument since the respondents were criticising the exhibition at the Centre Pompidou, which had begun in November 214, i.e. two months before the subpoena.

The appellants invoked Article 10 of the ECHR (European Convention for the Protection of Human Rights) to remind them that judges shall not interfere with the artists’ creative freedom or deny their artistic approach. However, this article also states that the artistic freedom of expression includes limitations, and in this case, the latter was legal since it relied upon Article L.122-4 of the French Intellectual Property Code. This article condemns any adaptation or transformation of a work without the consent of its author. Considering that the sculpture uses the dominant elements of the original photograph (the penguins and the pig’s flower necklace being of little relevance) and that it makes no mention of Davidovici’s work, Koons was obviously at fault. There is a very narrow line between inspiration and infringement of earlier work.

The appellants also sought to invoke the parody defence, relying on the definition given by the CJEU (Court of Justice of the European Union) in 2014 in the Deckmyn case, which stated that “the essential characteristics of parody are, first, to evoke an existing work while being noticeably different from it, and, secondly, to constitute an expression of humour or mockery“. The Paris Court of Appeal considered here that the humorous purpose was certainly not obvious, insofar as Koons described his “Fait d’hiver” as being “a work on renewal“, the illustration of the “process of self-acceptance“. Besides, according to the Court, there was a gap of almost 30 years between the advertising campaign and the sculpture. This period was so long that the public might not have perceived the parody.

The boundary between free inspiration and art infringement is very narrow, and sometimes difficult for artists to apprehend. Despite the solid defence strategy of Jeff Koons, one must acknowledge that it is essential to obtain prior approval before creating a work that may infringe the rights of another artist.