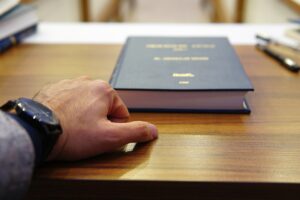 Less than a month after the 2022 presidential elections, a WIPO Arbitration and Mediation Center’s Expert rendered a decision regarding a domain name reproducing the name of the re-elected candidate Emmanuel Macron.

The domain name in dispute, <emmanuel-macron.com>, had been registered on the 3rd October 2015, during the time when Emmanuel Macron was still the Minister of Economy, Industry, and Digital Technology. Far from merely imitating the future president’s name, this litigious domain name would redirect to this website, which in fact, was the official website of the adverse polemist candidate during the 2022 presidential election. In this respect, we note that the domain name did not redirect to content related to Mr. Eric Zemmour before 2022 (according to an Archive.org search).

The complainant logically argues in their complaint that they must fulfill the requirements of paragraph 4(a) of the Policy, where it is specified that there are three cumulative elements necessary to claim the transfer of the disputed domain name.  These are :

♦ The similarity of the domain with a right of the complainant.

The interest of this case stands within two main points : the assessment of the similarity between the disputed domain name and the complainant’s prior rights, and the characterization of the registrant’s legitimate interest.

The complainant presents his arguments based on the existence of non-registered rights to the trademark “EMMANUEL MACRON”, a concept no longer existing under French law (except for well-known trademarks). If, by the simple fact that a domain name contains a family name that is not sufficient enough to justify an interest in bringing an action, it is important to note that under the Policy, the Experts’ assessment varies depending on the use of the family name made by the complainant. Here, the domain name was reproducing both the first name and the family name of Mr. Macron.

The Expert considers that when a person’s name is used as a trademark-like identifier in commerce, a complainant may be able to establish unregistered rights from that name to succeed in the UDRP proceedings. In this case, the Expert explains and outlines that the complainant’s use of the name “Emmanuel Macron” is not limited to his political activities but also extends to a commercial use being in this case, the publication and sale of books. Therefore, from the commercial use of his name, the complainant satisfies the requirements of the Expert. The Expert in retrospect acknowledges him as holding a non-registered trademark right. Therefore, the identity of the signs in comparison is established.

The Expert then raises the question of legitimate non-commercial or fair use of the domain name, according to paragraph 4(c)(iii) of the Policy.

In this case, the disputed domain name, redirects to the website of another opposing political figure. Therefore, the use of this domain name does not seem commercial and therefore, could more likely fall into the scope being freedom of speech.

However, previous experts have ruled that the right to legitimate criticism does not necessarily extend to the registration or use of a domain name which is identical to a trademark or a right, when it could create a risk of confusion through impersonation. Therefore, the use of the name EMMANUEL MACRON to redirect to his opponent’s website, Eric Zemmour, would incur a risk of implicit affiliation with the complainant.  This would also constitute, on the part of the respondent, an attempt to misleadingly divert Internet users, especially since the respondent cannot claim to be known or be recognized under the name “EMMANUEL MACRON”.

As a result, and according to paragraph 4 (c) (iii) of the Policy, the Expert has determined and decided that it cannot therefore, be considered as a legitimate non-commercial or fair use status. In conclusion, the registration and use in bad faith were also acknowledged for the same reasons. As the domain name was registered at the end of 2015, the panel observed that the complainant had already acquired significant notoriety as a public figure in France. Moreover, the redirection to the website of a political opponent was likely to mislead Internet users and disrupt the complainant’s activities.

In retrospect, this case could have been subject to much harsher and serious consequences, as the intent seemed to take the form of manipulating an electorate in the run up to the presidential election, rather than taking advantage for commercial purposes.