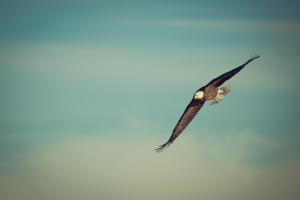 The judges of the Paris Court of Appeal, ruling on a referral from the Court of Cassation, adopted a strict approach to similarities between a figurative trademark and a later , semi-figurative trademark in a dispute between two companies specialized in ready-to-wear clothing.

The company Compagnie Financière de Californie (“Compagnie de Californie”), which specializes in street wear chic clothing, is the owner of the trademarks on

In 2013, the company noted that International Sport Fashion, also active in the fashion industry, had registered and used a trademark that it believes to be similar to its own:

The signs in question have the shape of an eagle’s head, without detail, reproduced in black and white within a circle.

In order to obtain compensation for the damage it considers to have suffered, Compagnie de Californie brought an action for infringement.

After having been dismissed at first instance and on appeal, the company turned to the Court of Cassation, which referred the case back to the trial judges after partial cassation.

The referring Court of Appeal first compared the trademarks in question. Its analysis is rigorous, particularly from a conceptual standpoint: it considers that the trademark of Compagnie de Californie refers to “the dark side of the bird of prey while the other refers to the image of a much less aggressive bird” (certainly due to the presence of a closed beak).

The court points out, among other things, that visually, these birds’ heads are not facing the same direction and that one has the beak closed and the other open.

On the phonetic level, the court notes, unsurprisingly, that the mark at issue will be pronounced “Eagle Square” in reference to the verbal element it contains, which will not be the case for the earlier mark.

The court, therefore, considers that there is no likelihood of confusion between the marks.

Next, it examines the question of the exploitation by International Sport Fashion of its mark for clothing products. The Court takes into account all possible elements such as the packaging which contains the goods. The name “EAGLE SQUARE” is affixed to the packaging; it, therefore, considers that there is no likelihood of confusion in the minds of consumers.

It also states that the contested sign which appears by itself on some of the articles is each time bicoloured, “inducing a caesura in the sign”, which gives an overall impression, very different from the earlier mark.

The court, therefore, did not grant the applications of Compagnie de Californie.

Thus, with respect to figurative marks, it is necessary to meticulously estimate the chances of success of an infringement action, since great similarities are generally required to recognize the likelihood of confusion.

This case shows that even marks with a comparable style (presence of a bird in a circle, with only the head entirely painted black) can coexist in the market.

It is questionable whether the Court of Appeal would have taken a different approach had International Sport Fashion affixed the only black and white eagle head to its products. The question also arises as to whether the outcome might have been partially different had  California Company also registered, as a trademark, its coloured eagle (which can be found in red on its official website https://www.compagniedecalifornie.com/).

Therefore, in addition to a detailed analysis of the chances of success before bringing an action, it is also necessary to protect the trademark as exploited, taking into account its variants, so as to benefit from the widest possible scope of protection.